Leicester Stand Up to Racism

Refugees welcome here – No to Islamophobia – Yes to diversity

Leicester says no to Racism 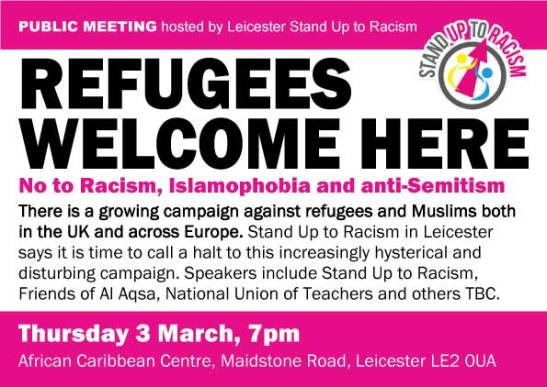 A racist offensive against refugees, migrants and Muslims is being pushed by some politicians and press. It is crucial we respond to this by standing in solidarity against attempts to divide our communities. The appalling treatment of refugees across Europe and the staggering rise in anti-Muslim hate crimes must be challenged.

Let’s send a message that drives back the tide of racism, fascism, Islamophobia, anti-Semitism and the scapegoating of migrants and refugees – we say refugees welcome here and yes to diversity!

Come to our public meeting on Thursday 3 March, 7pm at the African Caribbean Centre, Maidstone Road, Leicester. Speakers include Ismail Patel from Friends of Al Aqsa and Sabby Dhalu from Stand Up to Racism, Labour Councillor Diane Cank and others TBC.

Also, join the Europe-wide UN Anti-Racism Day Demonstration on 19 March when tens of thousands march across Britain, with major mobilisations in London, Scotland and Wales joining thousands in cities across Europe and around the world to say no to racism.

Coach from Leicester leaves from Humberstone Gate opposite Sainsburys at 8.30am. Tickets are £15 waged or £7 unwaged. Contact us for details.

Stand Up To Racism has led some of the biggest anti-racist mobilisations in Britain of the last decade, including the UN Anti-racism day demonstrations of 2014 and 2015 and the 100,000 strong Refugees Welcome demonstration on 12th September 2015.