Leicester Stand Up to Racism

Refugees welcome here – No to Islamophobia – Yes to diversity

On Saturday 16 May Leicester Stand Up To Racism held a symbolic protest in solidarity with the BBC journalist who was interviewing a doctor in Leicester City Centre who had recovered from COVID19. The journalist, crew and guest were subjected to racist and abusive behaviour to the point where filming could not continue and they had to leave.

Ten Stand Up To Racism activists gathered at the clock tower where the racist incident occurred.

The protest followed strict social distancing rules  whilst making it clear that racists are not welcome in Leicester. Shouts of “Whose Leicester? Our Leicester” and “Migrants welcome here” were chanted and well received by members of the public who stopped to take photographs and video the demonstration. 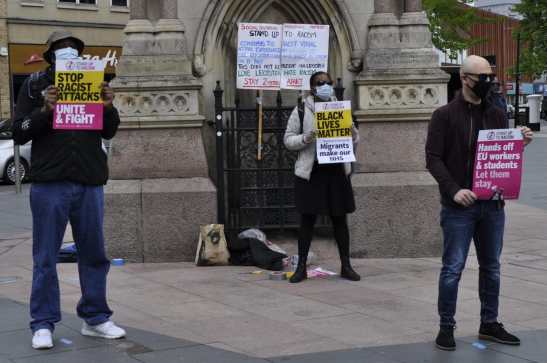 Nationally, Stand Up To Racism is supporting calls for no premature end to the lockdown, as that will cost more lives. The campaign is also heading up a demand for a public inquiry into disproportionate BAME deaths due to Coronavirus, and highlighting the context of institutionalised racism that is widely recognised as a key factor in the disproportionality.

This entry was posted on May 16, 2020 by leicestersutr in Leicester, racism.